A friend of my mother told her about a greenhouse she discovered on her way to Omaha recently, but as luck would have it, the place is a little over 20 miles north of St. Marys, so it looked like we were in for a road trip.

In typical Kansas weather fashion, the weather changed dramatically from Monday’s chilly drizzle to a pleasantly partly sunny mid-60s day. Mom, Aunt Joan and I piled into the Camry and off we went north on Highway 63 to Havensville. The road rippled through the green pastures and hilly farms of eastern Pottawatomie County until we reached our tiny destination. 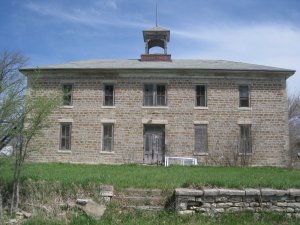 Word had it that we’d see the greenhouse as soon as we entered the town, but we had to drive through the main road twice before noticing some greenhouse-looking structures off on a side road. A truck had just left and the owner, Richard Rash, was outside and verified that we’d found the right place. It was across from a pretty house that looked like a restored bed and breakfast, and down the street from a church and school, each abandoned. Much of the town seemed abandoned, and there were few people around. While Mom shopped for peppers and tomatoes, I walked “downtown” and snapped some photos of the old bank building, former post office (now bar) and old fashioned gas station. From about a block away I heard a voice yell up the street, “smile, you’re on candid camera!” I turned around and waved, and he returned a friendly wave as well. Other than that, we saw no other people in town.

After the plant purchase, we turned east on a gravel road that led us to the town of Soldier. Signs of life here were just about as few and far between as in Havensville, at least until we passed the cafe on the main street. It was a little before noon and area farmers were starting to make their way in for lunch. I stopped at the post office for a postmark to add to my collection and commemorate the day’s adventure.

From Soldier, we drove north to Highway 9 and turned east, skipping for now the detour to Bancroft, a tiny town three miles off the highway that is home to one of the few remaining Kansas City Wyandotte Northwestern Railroad depots. The depot supposedly doubles as the town museum. But I will save it for another trip and include the nearby locale of Ontario as well. 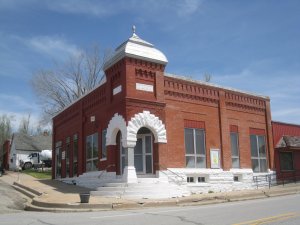 The first town we came to on K-9 was Goff. There is a pretty bank building in the center of town that is not only intact but used as a bank still. It’s next to a post office and across from an old water fountain. The Henry Bros. Station showcased an old Goff roadsign along with four pumps. It looked like a general store, but certainly wasn’t open. The liquor store around the bend, however, was.

A few miles east was the slightly more happening town of Wetmore, population 362 according to the 2000 Census. Aside from a grocery store, restaurant, modern bank, bar and library/city hall, there was an old-fashioned Chrysler Plymouth showroom and adjacent a refurbished Texaco station. A peek through the window was like glancing backwards into time. Inside were all sorts of antique cars, including a red and white Fairlane on central display. I didn’t see anyone inside, but they could have been having lunch at the nearby Dinner Bell. 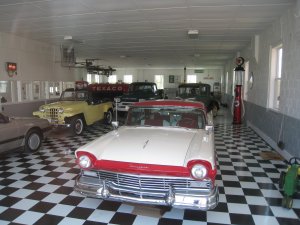 A block west of the main intersection in town was a tiny stone jail called the Wetmore Calaboose. A plaque next to it detailed the history and chronicled a few notorious local criminals who spent the night in the tiny jailhouse. On our way out of town, we passed a Standard station that currently serves as a parking garage for someone’s RV. At least the Standard sign is nicely intact.

Next on our K-9 drive was Netawaka, just past the US Highway 75 intersection in Jackson

County. Little Netawaka’s main street consisted of two buildings: the post office and a defunct business. There is a decent size park and community building as well as a city hall, and most surprisingly, a small medical clinic. We noticed on the highway side of the building was a door without steps, but hopefully this was not an intentional plan to cause injury to those exiting onto the front lawn. The main entrance was actually around the side. I don’t recall seeing a single soul in the short time we went through Netawaka.

We finally reached the Whiting Cafe just after 1:00 PM for lunch. It was a tiny building on the rather deserted main street of Whiting, just across from the massive grain elevator. I’d actually read about this cafe from my Kansas Explorer’s Club newsletter. In August, they will celebrate 25 years in operation, which is quite a feat for a town of only 200. To help support them, I thought it would be nice to have lunch there. The building was rather run-down, but inside it came alive with color and small town ambience. We were seated by 92-year-old Eva Martin, who took our lunch orders and struck up a conversation. The menu was one page but contained several choices, including local favorites like the pork tender sandwich, fried cheddar balls and corn nuggets. We also heard the pies were a specialty, and actually ordered a slice of coconut cream and blackberry first, since there were only a few slices left.

By the time our food came, most of the patrons had finished their lunch and left, and we had the

place to ourselves, along with Eva, cook Rosa Thomas and another employee Shelly. Mom asked if they had a cookbook, since she likes to collect them, and after cooking our lunch, Rosa actually went home to see if she had a copy of an old one. Sure enough she did and gave it to Mom as a gift. We all realized that they knew people we knew in St. Marys and found out that everyone working in the cafe was somehow related and it had always been kept in the family. The pork tenders Aunt Joan and I had were delicious and Mom raved about her breakfast-for-lunch eggs, which could be served all day.

After a filling meal, we split the coconut cream into threes and took the blackberry to go. We left around 2 very satisfied. They locked up after we left, but would later reopen at 5 for dinner. It felt good to support small town local businesses and experience the simple joys of small town life. I don’t think I’d want to do it every day, but it was a change of pace for me and for both my Mom and Aunt Joan, who had never heard of these towns before.

I decided to add one more county to our itinerary, so we continued east on K-9 to the Atchison County community of Muscotah. Unfortunately hard times were most palpable here and it was somewhat depressing. The main highway through town was flanked with boarded-up buildings or piles of rubble where businesses had once stood. A lowly marker indicating the namesake of the town was centrally placed amidst one of the rubble piles, next to a sign indicating a summer rose festival. Established in 1867, the town means “prairie on fire” in Kickapoo and was once a hiding place for the famous outlaw Jesse James. Perhaps his descendants were still cooped up in one of the ramshackle houses dotting the forlorn streets of town. A small park featured a community building and a water tower and there was a post office on the highway as well as a grain elevator near the former railroad tracks. A famous baseball player named Joe Tinker was born here in 1880.

We began our return home by heading west on a dirt road off of the highway at Muscotah. It was probably about nine miles long, passing farmsteads with rich soil and plenty of livestock. We reached US-75 and turned south towards Holton. I was surprised to see the development along the highway, including several motels, restaurants and even a Walmart. Holton is the county seat of Jackson County and its downtown is off the highway centered around the courthouse on a somewhat thriving town square. We looked for a coffee shop, but could only find cafes, diners and a sweet shop. 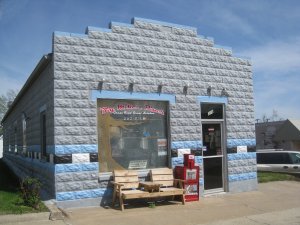 Deciding to skip the coffee and continue westward, we got on K-16/116 and continued west to

K-79 north to tiny Circleville. As soon as I saw the ball diamond, I realized I had been here as a child, but couldn’t recall why or when. There was a small market downtown next to a post office and bank, and I got a root beer for Mom and a grape soda for myself. The cafe around the corner was closed for the day and apparently for sale, so likely not long for this world. A man in a dunebuggy pulled up behind our car as I was snapping photos of the town’s few buildings.

Soon we were back on US-63 where it all began, and continued south towards St. Marys. We

pulled off in Emmett, where I noticed the downtown was even more sparse than when I was growing up. The sad green building across from the post office still had the “D & L Market” sign on the side, but had clearly been defunct for some time now. One bar remained alive on the main street and the same highway bar that had been there for years with different names also remained; a bar town till the end I suppose.

One last stop just south of Emmett was at the Holy Cross cemetery, only a half mile east of the highway on a small knoll. The gravelly road there was short, but steep and bumpy. At the cemetery, I saw a headstone for someone who had been one 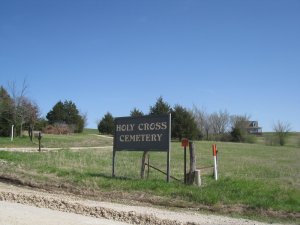 of my seventh grade teachers, ready for a date of death inscription when the time comes. There were even brochures at the entrance gates. Supposedly this was once a community, or at least a post office before Emmett was established. A few houses nearby displayed recognizable names.

It was then about five miles to St. Marys, and we pulled in completely tired from the pleasant drive. We all had a pretty good day traversing through rural Northeast Kansas, but we were plum tuckered out! Still, it was a good unplanned trip that hopefully will be the appetizer for more to come.