On Wednesday I drove through some rain up to Manhattan to get my car checked out. I was also scheduled to meet with a former professor and advisor who had since retired from teaching at Kansas State University. Affectionately known as the “Little Apple,” Manhattan was home for me for about six years during my college days (1991-1997, including graduate school). I had a 10:00 appointment with Little Apple Toyota/Honda, where I had actually purchased my car back in 2002.

I waited for nearly an hour before I could even get a guesstimation of the time it might take to diagnose the car, so I called my former geography professor and he suggested picking me up and driving around while I waited. There was certainly a lot of new construction and many changes since I was last in Manhattan probably three years ago. The largest effort being the 3rd Street area, which turned into a development debacle. Instead of the pedestrianized mom-n-pop shops that were supposed to have been planned, large stores like Bed Bath & Beyond, Petco and Hy-Vee are being built, across the street from Walmart, Dillons and other mega retailers. It doesn’t make much sense, but the city officials must have caved to the developers’ demands. Another snafu from the same developer is on the south side of downtown, where buildings sit vacant during this recession, unlikely to develop into the entertainment district that was proposed before the economy went south.

There were some success stories involving new motels, restaurants and housing areas, but some development decisions appear to have been made with a larger city in mind, rather than Manhattan’s 50,000+ size. Hopefully the surplus of competition won’t cause the city to economically implode.

We had lunch at the Hibachi Hut, a Cajun restaurant that was thankfully still in business. Still as good as I remember, I had the “Belly Bomb” burger with french fries and gravy for dipping. We sat there and chatted for at least two hours. When we returned to the car–a cherry red 1963 Baja Bug–we discovered we’d left the lights on and the battery was dead. Luckily we were rescued by his wife, who delivered me back to the car dealership. I had been contacted before lunch by phone to discover that the part needed for my car wasn’t available until at least the next day. Clearly I’d have to come back.

After saying goodbye, I returned to Aggieville to get a cup of coffee at Radina’s, browse the Dusty Bookshelf and do some shopping at Varney’s. I bought a t-shirt and a Mother’s Day card 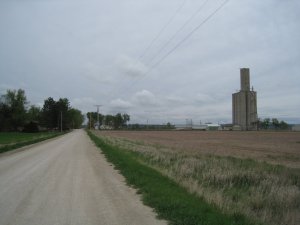 and proceeded to head back to St. Marys, taking the old Highway 24 that had been a favorite drive of mine. I exited the four-lane US-24 onto Military Trail Road, passing the tiny place known as Swamp Angel. Aside from the road sign reading “Swamp Angel Road,” a grain elevator and a handful of houses, there’s not much to indicate that it’s anything other than suburban farmland. A few miles further, I entered the town of Saint George, where I saw a brand new school on the north side of the road.

Unfortunately the old pink Cadillac bumper that had been sticking out of the side of a red barn at the entrance of town was no longer there. However, the farmer mural on a building across the

street from it was, and an old gas station building also remained. A few businesses dotted the main street, including the legendary Green Chicken bar where the notorious St. George Geographical Society meetings had first originated. It appeared that the bank across the street was still functioning, but otherwise the town was largely residential and likely a bedroom community to Manhattan, as it pretty much was when I was a college student.

Driving through Wamego, I noticed several new stores that revealed an attempt to make the town appealing to tourists. After all, the relatively new Oz Museum is located there as well as the old Columbian Theatre. It would seem that some of the craft stores and antique shops are not doing as well, but overall the downtown looked pleasant and more alive than St. Marys! There also were signs of more businesses at the outskirts of town. 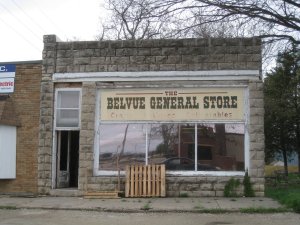 Between Wamego and St. Marys is the small town of Belvue. For such a tiny village, their industry seems to have tripled. A large marble shop was built at the east end of town, and a lumber business is on the western edge. The large grain elevator still sits in the center of town. The fire department has a spiffy new building that must have cost a pretty penny. And the good old Cottage Inn is still serving up vittles.

While this hardly qualifies as a road trip, it was nice to do some exploring through the towns near to St. Marys. Combined with a wonderful visit with a former mentor, it transformed an errand into an enjoyable day.