Mom wanted to go to the Dollar General and then take us to lunch at the new-to-me Chinese restaurant in Wamego on Friday, and said we could stop downtown first. Mom, Dad, Aunt Joan and I piled into the Camry and drove the short 13 miles to Wamego. 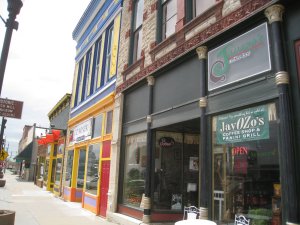 Our first stop was a winery store downtown, where my Dad and I sampled a couple of their red selections. They had some wines featuring 100% Kansas-grown grapes, where others were a mix. The Oz Winery, like many establishments in Wamego, has adopted a name to correspond with the new identity Wamego has chosen to align with. Even some of the wine names–complete with creatively illustrated labels–reflect this new nomenclature, such as the Witch in a Ditch, Professor Marvel’s Ruby Red and Emerald City Lights varieties. My family members gifted me with a bottle of Run Toto Run (a semi-dry red), a jar of bumbleberry jam (no, it’s not a real fruit) and an Oz Winery t-shirt.

Next we drove to the west edge of town and had a good lunch at the Imperial Palace buffet. Just

about everything on the buffet was fried, but for a small town it was pretty good. They did have a salad bar and a few vegetables, but I decided to dive into the fried stuff and had black pepper chicken, crab rangoon, fried okra and some General Tso’s chicken. The rice was very good, a three-grain blend apparently. For dessert, we had some of the K-State ice cream they had in buckets we had to scoop out. It was fun!

We went back to Ozland downtown and entered the relatively new Oz Museum. Opened in late 2003 in a space that used to house an antique emporium where my

mother had a booth, the museum highlights all that is the legendary creation of L. Frank Baum. We actually spent some time at the gift shop before wandering through the museum. Exhibits featured all sorts of paraphernalia from the author, the film and specific movie personae and the actors themselves. Each section began with a life-size replica of one of the main characters, starting with Dorothy herself and continuing with the Scarecrow, Tin Man, Cowardly Lion, Wicked Witch, Flying Monkeys and Glinda the Good Witch. The wizard himself was not displayed, but an exhibit with magenta velvet curtains implied his presence. One section featured books and other Wizard of Oz items in foreign languages such as Japanese, German, Russian and Arabic. A theater showing the movie continuously featured a gigantic quilt depicting movie scenes. Another section displayed spinoffs from the movie like the musical Wicked and Disney‘s Return to Oz.

All in all, it was a good experience. I was a little disappointed that there were no original ruby 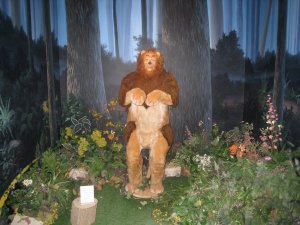 slippers used in the filming, but a plaque explained that there had been plans to have one of the six original pairs displayed, but it was stolen from the Judy Garland Museum in Minnesota before it reached Wamego. There were certainly a lot of informational displays that I didn’t take the time to read, but it was a good overview of the magical film. The gift shop had quite a selection of Oz-related merchandise. I could not resist getting another t-shirt and a magnet for my collection.

By then it was much later than we’d expected to be away from home, so we made as if we had clicked our heels and went home to let the dog out. We never did make it to Dollar General, but it was another pleasant diversion in this eventful visit that was only a week old, and a day that was not yet over…