It was a long time coming, but on Saturday I finally made it to the Kansas Sampler Festival. This gathering of communities, businesses and organizations from across Kansas is the brainchild of one of the state’s most remarkable people, Marci Penner. She has virtually dedicated her life to sustaining rural communities in her home state and has made such a difference for countless small towns on the verge of becoming extinct. Many people on the coasts may not think of Kansas as a tourist destination, but those who are from here know that Kansas has a lot to offer. 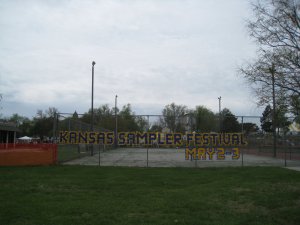 I’ve seen a great deal of changes over the years and can tell that Kansas has done a lot to spruce itself up. I’m pretty sure Marci has been instrumental in it happening.

Started on her family farm near Inman twenty years ago, the Sampler Festival has become an annual event and is one of the many achievements of the Kansas Sampler Foundation, where she is the executive director. In addition to the festival, she has instituted an Explorers Club, Kansas blog and authored a detailed guidebook covering all 105 counties and most communities in the state. The Sampler Festival this year was held in Concordia and was scheduled to feature 145 communities from all reaches of the state. The venue offers the chance to get a “sample” of what these places have to offer; hence the festival’s name.

My cousin Mary Pat and I decided to make the drive on Saturday morning and left around 9:30 AM west on US-24. My parents were supposed to go, but didn’t feel well so it was just the two of us. It was a long but nice drive through Manhattan and northwest through rolling hills and the scenic K-9 highway. We saw several wild turkeys and squirrels running along the shoulder of the highway, especially near the Washington County line. 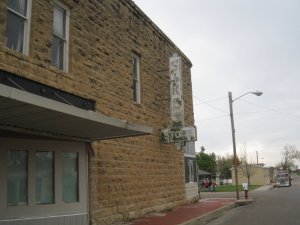 On the way, we stopped at a few little towns to get some snapshots. The first such stop was Leonardville, northwest of Manhattan along US-24. We had been following several motorcyclists and noticed they all turned onto the cross street in downtown Leonardville where I noticed the streets lined with bikes. It was the Leonardville Poker Run, complete with an evening hog roast. We declined to participate but I couldn’t help notice a few bikers taking their own pictures of their friends in front of the relatively new Nelson’s Landing restaurant, one of the few active businesses in town. There were a few other bars, a liquor store and a service station that I could see.

From Clay Center, I turned north on K-15 until we reached the junction of K-9, which was coincidentally the same highway I’d taken a few days before through Wetmore and Whiting, but this time of course we were heading west through different territory. The first town we came to

was Clifton, situated on the Clay-Washington county line. Immeditately noticeable to the left (Clay County) was a series of old buildings, one of which had a small bi-plane sticking out of the roof. Not far from it was an old Buick jammed nose-first into the ground. A little bit further and there was a Volkswagen Bug in a tree! An arched wooden sign proclaimed this conglomeration of structures as “What Not City.” A bank building, presumably an actual former bank, proclaimed the “Last National Bank” and featured a vault in the window. It was a funny sight to behold, so we stopped and took some pictures. It was definitely a pleasant surprise to discover.

Probably less than a mile west of Clifton was the microscopic town of Vining, also on the county line. A historical plaque in front of the park explained that the townsite was created as a result of a dispute between railroad officials. Without the “Vining City Limits” sign, no one would have

known it was a separate city. I did discover that the town featured a large bar called Tailgaters. According to signs that started before we approached Clifton, they have great steaks. It was fairly quiet when we passed by, but it wasn’t lunch time yet.

On our way out of Clifton, we saw a small housing development that almost seemed out of place for such a small town with several old houses. Some of the houses sat very close to each other, but suddenly gave way to endless prairie, illustrating the irony of city zoning. The road continued west to the Cloud County community of Clyde. Clyde’s downtown

looked a bit more lively and many parking spaces on its cobbled main street were filled on this busy Saturday. We noticed a kind of New Orleans-style balcony with empty wrought iron tables, but never saw a name or how to get to it. Further research indicates that it’s called French Quarters, a part of the farm supply store below it.

Not many miles west of Clyde over the Republican River was the village of Ames. I’d been through Ames in the early 1990s but a blue historical marker atop concrete stairs that led to a patch of grass pretty much proclaimed the place a ghost town with its inscription reading “Ames Town Site / 1878-2000’s.” The only 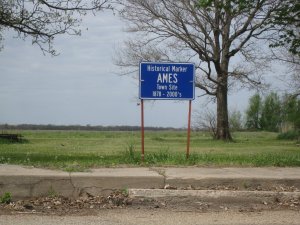 remaining structures were the Ames Grain buildings along the highway and a few houses, although it wasn’t entirely clear if the grain company was still functioning. Somewhere in my collection of photographs I have one of the old post office and possibly a few other buildings that had been the “main street.” The identity was not completely lost, as the state placed a sign on K-9 highway. History tells us that the population of Ames was 120 one century ago.

The last stop before we reached our destination was tiny Rice, home of a stone arch bridge that was marked with a series of signs. A similar historical marker sat on the highway adjacent to an

old shop currently used for storage and in front of a nice looking white farmhouse. The bridge was on a gravel street a block off of the highway. It was a tranquil setting, with the lazy stream flowing below and purple flowers blooming nearby. Steps led down to the stream next to a big tree, allowing us a better look at the stone bridge.

Across the highway was an abandoned wooden grain elevator, sitting lonely against the backdrop of blue sky and green field. The blue historical marker pronounced the date of death for Rice as 1980, which happens to be when the post office closed.

Moving on, we reached Concordia around noon. It was fairly easy to find the city park where the festival was being held. Yellow signs pointed the way and we quickly found a parking spot on one of the streets bordering the park. We arrived at one of the three entrances and discovered several tents scattered throughout the park grounds. Admission was only $5 and we each got a green stamp on our hands. 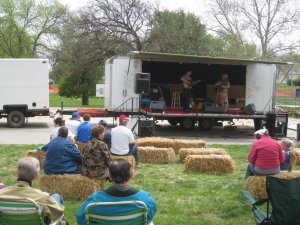 After getting our bearings, we visited the statewide exhibit tent. There were so many vendors and each had pamphlets or brochures for the taking. Some also had little gifts like pencils, wooden nickels or bookmarks. Included in this tent were such organizations as the Kansas Buffalo Association, Kansas Barn Alliance, Kansas Bed & Breakfast Association and the Kansas Scenic Byways Program among others. By the time we’d finished browsing the tent, almost an hour had passed! 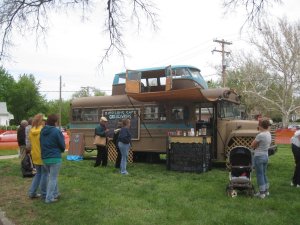 bus. The Birdsong Cafe, based in Clyde, is a traveling cafe made from a schoolbus with a partial Volkswagen minivan on top. It was an exhibit in itself, but the menu looked delicious and as my South By Southwest Wrap attested, it was. Since we’d ventured to the other side of the park to get lunch, we decided to continue on that side and arc around the park to where we’d started. We passed a live concert by some Kansas folk groups. People sat on hay bales listening to the music in the beautiful cool weather.

Dickinson County had its own tent, and almost every city and town had their own booth inside it. The city of Hope had its own booth, but also from hope was the Abeldt Lambs and sheepshearing 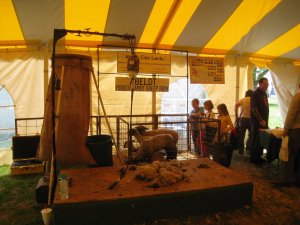 display. Even tiny Manchester had a booth–a town with a population of only 100. The display from Chapman illustrated dramatic photographs of the June 2008 tornado. Of course Abilene had an extensive display featuring its many museums, including the Eisenhower Museum. A live greyhound was out of its pen next to the display. Apparently she was a greeter at the Greyhound Hall of Fame, but here she was a little spooked by the nearby war reenactments involving guns.

Other tents featured regional displays, mostly counties or larger cities in various geographic corners of the state. Between the Greenwood County and Marion County booths, I ran into Marci Penner herself. As we continued

through, it was evident that we were collecting a lot of brochures and consequently they were getting heavy. I bought some soap at the Elk County display and got a free bottle of water. Elk County is home to the community of Elk Falls, a small town that describes itself as the “largest living ghost town” and is also home to a large collection of decorated outhouses!

We returned to the car to unload the first batch of bags. When we came back, we headed straight for the mercantile tent to load up again. It was getting rather late in the afternoon, and the festival was only open until 5 PM. I bought several items at the tent, including some fudge, coffee, honey and jam as well the book American Shaolin by Kansas author Matthew Polly. The last stops were at the Kansas Sampler Foundation tent and the Our Daily Bread booth to get some scones to take home. We still hadn’t seen at least four of the booths, but it was almost 5 PM and we were exhausted. It was such a treat, though, and I will admit that I had not expected to stay so long. I thought there would be some exhibits but not nearly the magnitude that I witnessed.

On the drive home, we chatted as we kept each other awake, passing through the endless 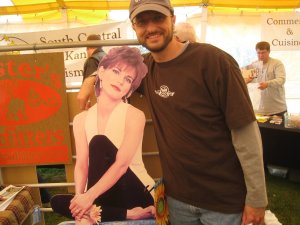 pastures and very few towns. I took I-81 south to US-24 through Miltonvale and back to Clay Center, just to vary the return trip route, but we didn’t stop again. Both of us were worn out but very satisfied at having gone. I hope I can make it to next year’s festival in Leavenworth!