On Sunday I drove up to Manhattan to visit friends from my college days and stayed the night. The plan was that in the morning I would get up and have my car fixed with the part that had come in. The evening was nice, just us sitting around the kitchen table talking about random subjects like mimeographs, dementia and cats. My friends have a lot of cats and two dogs. When

I say a lot of cats, I mean about 11. I think each one of them came up to me in turn to get their dose of petting. I have to say I’m not used to so many cats, although I love animals dearly. By the end of the evening, my black shirt was nearly white with all the hair shed by the cats. But they were sweet and all seemed to like me.

Two halves of a sectional couch were pushed together and draped with blankets for my bed. Throughout the night, I had random kitties jumping on the bed, but luckily none landed on my head. In the morning, a dog licking my face was the alarm clock. After some more chatting, I took off for my appointment to have an engine airflow sensor replaced in my Corolla. First, though, I had a scone and a cup of delicious coffee from Radina’s in Aggieville.

I waited for just under an hour and a half for my car to be ready. The weather was partly sunny and pleasant, so I decided to take off on a mini road trip. I turned west on Anderson Avenue, which took me out into the country through the small town of Keats. I remember going to a small isolated park there and studying. No one had been around, and it was very peaceful. Nothing had changed, and the old Chapman’s station was still there on the highway.

I continued along US-24 and turned off on a gravel road that led me to Lasita. To call Lasita a town would be inappropriate, but there was a sign near the crossroads. Essentially, there was a cemetery, abandoned grain elevator and an abandoned house. A historical marker chronicled a brief history of the community. To the south, vast green fields swayed in the wind. A road grader was realigning the gravel to the north. When I left Lasita, I passed him, necessitating driving over the central ridge of gravel in the road.

It was 12:30 or so and time for lunch. I had somewhat planned to visit a small town cafe, and I 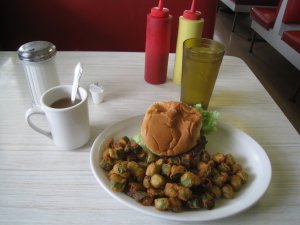 was in luck when I reached Green, Kansas. One of the only businesses still alive and kicking, the place was actually busy for a small town. It was more like a diner, much larger than the Whiting Cafe. I sat at a booth on the side where all the farmers were. There must have been about eight customers. I ordered a cheeseburger and fried okra. It came out pretty quickly and was decent enough, and definitely filling. I bought a local cookbook for my Mom’s collection and headed to the post office to get a postmark for my collection.

I detoured on a gravel road northwest of Green to the small community of Fact. I’d also been here before, but it was only two miles out of the way. The Methodist Church was still there, sitting on a little hillock, complete with an addition. Across the road was an auto mechanic shop and a house. Otherwise, that was it to Fact. It’s a pretty interesting name for a town, although, again I’m not sure if Fact could be considered a town.

Thinking I would take a rural detour along dirt roads, I headed north on a road next to the church, but after a few miles it was clear that this road was not suitable for a non-4WD vehicle. So, I turned around and headed back to the main road, passing another or possibly the same road grader that I’d seen in Lasita.

looming church standing stark against the prairie backdrop. This was Kimeo. Saint Michael’s Catholic Church and cemetery stood in a well-groomed lot just off the road, next to what could have been the old parsonage, now abandoned. It wasn’t clear if the church was still used, but it was in good condition. The doors were locked, so I couldn’t go in and the high stained glass windows prevented a peek inside. A road sign before the turnoff said “Kimeo, Kansas, population rising.” With a population of zero, the sign surely would remain accurate. At least for about 10 minutes, I was the population!

At the intersection of K-9 (again) and K-119, I continued north to the town of Greenleaf. 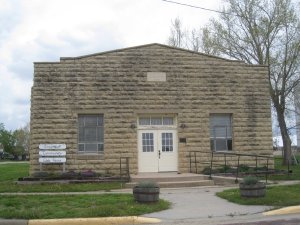 Compared to the other places I’d been, Greenleaf seemed to be a beehive of activity. The small downtown was compact but more stores were functioning than in Green. A long brick building housed the grocery store, post office and library. There was even a bank, fire department and soon-to-be-open cafe. I checked my map and the time and thought I might be able to get to a couple places in the county I hadn’t yet been, so I forged west along K-9, looking for the turnoff for Morrowville.

It wasn’t until I saw a street sign for one of the rural roads that I realized I’d gone to far. I then

saw a sign for a historical marker and decided I might as well continue. I knew the marker was a tribute to the ghost town of Strawberry. To the south side of the highway it sat adjacent to a field. Other than the marker, there was no evidence whatsoever that anything had ever been here. Not that Strawberry was much of a town, but in its day it was known for its dance pavilion where people would come from all around to see popular bands.

I turned around and headed back about four miles, then turning north on an unpaved road that would eventually connect with US-36. En route, I passed through another ghost town commemorated with a stone sign reading “Enosdale, 1884-1994.” I’d been through here in about 1993, and I could have pronounced it a ghost town then. I noticed one of the abandoned buildings is no longer there, but at least three were still lined up immediately north of the post rock sign.

Morrowville sits just off of US-36 on K-15, a small town with wide streets. There is a modern grade school at the north end of town that had just ended for the day when I got there.

Downtown was a bank building and a welding shop, but not much else was open. The postmaster told me that in the city park was supposedly the first bulldozers that had been invented, although his voice inflection indicated his doubt of this claim. The park was nice for this size town and sure enough, encased in a mesh wire enclosure was an old-fashioned machine that I took to be the infamous bulldozer. An abandoned gas station and restaurant sat on the junction of K-15 and US-36, which I passed as I headed to my westernmost destination of Haddam. 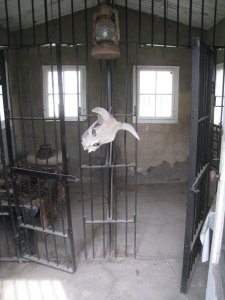 Named for a town in Connecticut, Haddam definitely had its share of main street buildings that no longer generated business. There was a cafe and an auto parts store, which seemed to do a good business. The post office was the center of most of the town’s activity. There were about five people gossiping out front when I went in. I then did a “walking tour” of the town, going up and down the main street and then detouring slightly to visit the 1901 jail, or calaboose, located just off the main drag. I drove to the western end of town to see the water tower and high school, which still seems to be in operation. A signpost on the highway advertised the Haddam Frontier Days to be held this August.

At this point it was getting rather late, so I turned around and started to

head home. I stopped in Washington for gas and drove through the county seat town. The courthouse was the focal point on the square, flanked by several businesses one would expect to find in a town of 1,300. The streets on the square and one leading to it were made of brick. The county historical museum and library were both closed, but I satisfied my craving for ice cream at the Swirly Top on US-36, and it was soft-serve swirl to boot!

Rather than take eastbound US-36, I veered south again on K-15 and turned eastward on K-9, past the exit for Greenleaf and on to the town of Barnes. Now I’d probably been through Barnes as recent as four years ago, but I was surprised to see that it is

trying to develop itself as a little antique town. I’d had a taste of Barnes from the Sampler Festival when I bought some scones from the Our Daily Bread factory, but aside from that I noticed at least four specialty/craft stores, including one that was still open (it was probably after 6 PM). There was also a functioning bank, post office and gas station/bar. While I saw a “for sale” sign on one of the buildings, I am hoping for success for this little town of just over 150 people.

My final stop on the way home was in Waterville. The centerpiece of this small town is the Weaver Hotel, currently under renovation. There are several ornate Victorian homes found 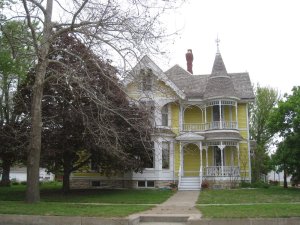 scattered throughout the town, including a notable yellow house just next to the commercial district of the main street. The train depot from 1870 is also on display, as was the opera house across from the hotel. Trucks lined the parking spaces on main street, most likely to visit the local watering hole, Jocks. Some vacant buildings across the street were still standing in pretty good condition, so perhaps there are plans for a renewed business district.

I went back through Manhattan, having traveled south through Randolph, where there was a road contruction delay of at least 10 minutes. I pulled into my parents’ driveway at 7 PM, just in time for dinner.