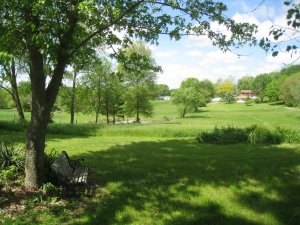 A decent night’s sleep, coffee and a bagel from the motel reception area got me going in the morning. Mom and Dad didn’t even have breakfast, but we made plans with Ginny to pick her up and go have brunch somewhere. It was close to 11:30 AM before we made it to her house, and she met me inside her back foyer to suggest the day’s itinerary. It sounded great to me and we were all flexible anyway, so off we went to Glasgow for brunch.

Located on bluffs overlooking the Missouri River, Glasgow is a 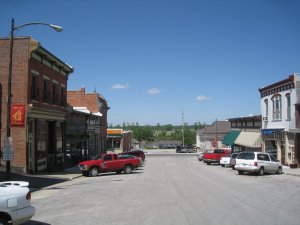 quaint small town with one heck of a good cafe. We found a table at the front of the Rolling Pin on Market Street. The place was bustling and with good reason. The food was scrumptious, the pies in demand and the ambiance inviting. They even had an outdoor patio, but it was a little too chilly for us to sit outside. We all enjoyed sandwiches and pie while we chatted and watched the busy Glaswegians pick up their to-go orders. Ginny surmised there must have been a track meet in town to account for the rush. Then again, it was a Saturday, lunchtime and a gorgeous day.

After lunch we drove to the river’s edge and waited to board the ferry. The main bridge crossing the river was under construction and the only way to cross was by ferry. My parents had never been on a ferry before, and my Dad couldn’t believe we were actually going to fit the car on something that would carry us across the river. Within minutes we were aboard a small but adequate ferry that could have held up to nine vehicles, but there were only three, ours included. It was a short ride, but a neat experience. At times it appeared as if we weren’t even moving until we looked at the swiftly flowing river. 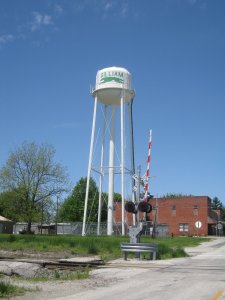 realizing we should have turned south on a back road to get to Arrow Rock. There were no highway signs, which are usually superfluous in Missouri. To the state’s credit, the road we needed to take was not a direct link to Arrow Rock. Luckily my county maps steered us in the right direction, roughly following a few state roads paralleling the river on the west side. The signpost for Saline City affirmed that we were on the right road, although it could have been easy to miss this four-house town.

Soon a green sign welcomed us to Arrow Rock, population 79. Today, however, there must have been several hundred. Ginny hadn’t planned on it, but today were the dual festivities of the Spring Garden Show & Taste of Missouri and the George Caleb Bingham Art Festival. We knew that tiny Arrow Rock was a historic and quaint touristy village, but these celebrations made visiting it even more dramatic.

restored old-fashioned stores, mostly antique, but including one general store/coffee shop. Because of the festivals, it was relatively busy. I ordered another Italian soda and walked around. Mom bought a cookbook and then both Mom and Dad sat down at the coffeeshop and relaxed while Ginny waited in line for ice cream at a store down the road.

Lewis and Clark passed through Arrow Rock in 1804 and was also a trading point on the Santa Fe Trail in the early 1820s, if not the trailhead itself. Around this time, painter George Caleb Bingham settled here and has since become a local celebrity, hence the art show that bears his name. Several old buildings made of stone dotted the townsite. The old opera house, which still stages productions, sits on a hill overlooking the eastern end of main street. It would have been nice to have lunch or a drink at the tavern, but we were still full from lunch.

Too bad we didn’t stop at Blackwater for their festival, but instead we headed back to Fayette

and relaxed at Ginny’s house, looking at geneaological books and Missouri historical reference materials. It was a beautiful afternoon and the view from the converted back porch was a delight. Several birds stopped to drink sugarwater from Ginny’s bird feeder on the back deck. One was black with white spots but we couldn’t figure out its name. There were several hummingbirds and Baltimore orioles.

Eventually it was dinnertime and we went as planned to downtown Fayette’s best restaurant, Emmet’s. A former pharmacy and barbershop adjacent to each other, Emmet’s had been converted into an elegant restaurant-bar. We waited for about 25 minutes for a table, clearly a good sign that the place would likely be worth it. And it was. We were finally seated in the dining room, with high vaulted ceilings and spindle fans. The restaurant was full of teenagers in formal wear–a clear sign that it was Prom Night in Fayette.

Dinner was very good. I had pasta with chicken and green vegetables and took the chocolate cobbler to go. It was they type of restaurant I would have expected to find in Saint Louis, but not 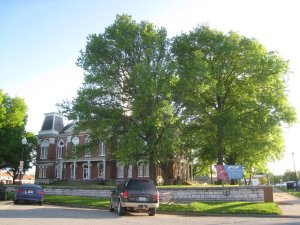 Fayette, and it was nice to eat out and not have something fried for a change. After dinner we went back to Ginny’s for a little more visiting before heading back to the hotel. Dad picked up several photocopies Ginny had made of the genealogy materials and we promised to keep in touch. It was a pleasure to talk with Ginny, who likes to travel and take the back roads instead of the interstate. She and I would have fun driving around rural Missouri if I can make it back someday.

Back at the motel, there was no wireless internet due to the storm a few days earlier that had knocked out their connection. It took little time to pack my belongings in preparation for our return to Kansas the next morning. We lucked out with such a good weather day and it was an added bonus to connect with relatives on my Dad’s side of the family.