As quickly as it came, our time in Boonville had come to a close and we really hadn’t gotten the chance to explore the town where we slept for two days. We had driven through the downtown several times going back and forth from Fayette, but never stopped. From the north, the Missouri River bridge immediately turns into the town’s Main Street and the first thing visible even before that is the majestic Hotel Frederick. I had looked into staying at this restored bed and breakfast, but it was too expensive. Still it would be a nice place to spend a weekend getaway, with a perfect view of the Missouri River and a location adjacent to several bars and shops downtown. There is also a large casino on the river, probably within walking distance of the bridge. My gambling uncle has been here many times.

Bobber Cafe, a stone’s throw from the motel. After filling up and getting a thermos of coffee to go, I detoured right away on a back road south of the cafe and we were soon rolling through central Cooper County, Missouri under a pleasantly cloudy Sunday sky. The first town we came to was Lone Elm, which consisted mostly of a crossroads, church, an old building known as the “Lone Elm Store” and a few houses on each corner of the highway. The current function of the store seems to be primarily auto sales, judging from the “for sale” sign on a pick-up truck with a camper shell sitting under its covered entranceway.

Quietly we went on south and then a little west to the town of Bunceton. What Bunceton lacked

in activity it made up for with a tragic ghost town of a main street, complete with age-old facades, crumbling sidewalks and remnants of businesses of the past, standing almost resplendently on the north side of the road. Nestled amongst these ruins was that side of the street’s only functioning business: the post office. Across the street were some active businesses, although all but the garage were closed on this lazy Sunday. A sign in front of the mint ice cream colored city hall announced a water line upgrade project underway for the town. 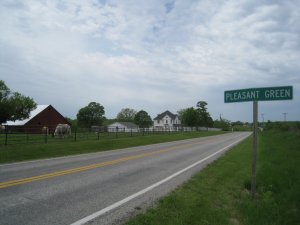 Several miles west of Bunceton and onto another Missouri state road, we passed the sign for tiny Pleasant Green, whose equine population surely outranked humans. In fact, when I stopped to take a picture of the sign, the horses in the fenced yard across the road all looked up as if to welcome me to their town. I presumed the gray mare would have been the mayor. A stately white farmhouse adjacent to the horse pen seemed to be the only other structure in the place, and soon we were on our way westward.

Poor old Clifton City would practically be a ghost town were it not for the trailhead on the Katy Trail rails-to-trails bike trail. Aside from some houses, there was evidence of a former

“downtown” district with about three abandoned buildings. Items strewn about in front of and on tables next to one of the buildings indicated that a perpetual yard sale was going on. Across the street was a trailer home with more stuff in the yard. On a side street where I parked the car, there were about five bicycles lined up end to end. We couldn’t figure out if they were for sale, private property or free.

The whole experience must have fouled up my sense of direction because after about six miles or so, we ended up in Otterville, a place I had definitely not 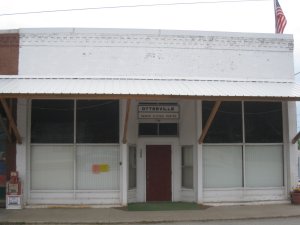 planned on going. The plan was to head directly west to Beaman and then catch a state road around Sedalia to Georgetown and on north through Hughesville. In an effort to see the abandoned buildings of Clifton City, I turned south and continued along the highway. We’d passed through Otterville several years ago on another cross-state trip, but since we were in town I decided to drive around and see what we could find. There was a church, cemetery and several houses, but then we found a major highway and the dowtown. Little Otterville had probably seen its heyday in the past, but there were still signs of life. A bar on the highway interested my Dad, but we reminded him that we still had to make our way home somehow. And for the record, not once during our short time in town did we see an otter.

We drove past Smithton and on into Sedalia, where we stopped for a bio-break and some bottled water. Before reaching the junction to US Highway 65 north, we passed several large houses on the wide US-50. Sedalia is one of central Missouri’s largest and most notable cities, although it’s

population of just over 20,000 would hardly attest to this. It is the location of the Missouri State Fair as well as the Pettis County seat and home of a jazz festival, civil war history and former railroad hub. From US-65 we took a small state road detour northwest through the village of Georgetown. A pristine church and a few buildings and homes were all that we could see, although there was a historical marker.

on our roundabout way back to I-70. Most of the houses in this town were well-kept but there were few, if any, functional businesses aside from the post office and maybe a city hall. A few farmers were jawing with each other in front of the “downtown” building facades, of which few remained. However, a rural school on the north end of town indicated that this town was still fighting to remain viable.

A beautifully restored house in Houstonia caught our attention, and even though it probably wasn’t that old, it was very inviting and caused us to drive around

the block twice to get a better look at it. An affable man on a riding mower across the street smiled as we drove by. Downtown was sparse but visible at least. Another person was mowing the yard next to one of the boarded up brick buildings. For a Sunday, this town seemed busier than usual.

We continued north, crossing the Saline County line and past McAlister Springs on the Blackwater River before meeting up with the interchange with I-70 just east of Sweet Springs. I tried for a pitstop at Emma, but the restaurant/gas station I saw from the interstate was fenced off and closed up when we approached. Since I’d taken the trouble to exit the freeway, we ventured into town. Emma straddles the Saline-Lafayette County line and despite the closed businesses at the

interchange, probably still benefits from being close to I-70. I found a locked bathroom at the city park, so we went back to the highway and continued west to Concordia where we found a travel plaza.

Of course the designated rest area was immediately past the Concordia exit, but it was too late and we’d already stopped and were ready to head back to Kansas. We made good time, passing through Kansas City‘s skyline in no time. For a Mother’s Day, the traffic was very light. We decided to celebrate the holiday and the close of a good weekend by having dinner at the Blind Tiger Brewery in Topeka, which was timed perfectly for dinner and the time we were hungry. My parents had steak and I had pasta again and of course we sampled some of their delectable microbrews. We were home well before the projected “deadline” of 7 PM and had time enough to decompress before bedtime.