Skip to content
I had heard about the “8 Wonders of Kansas” competition through newspaper clippings sent from my Mom and from friends talking about certain Kansas attractions. One of the “Wonders” happened 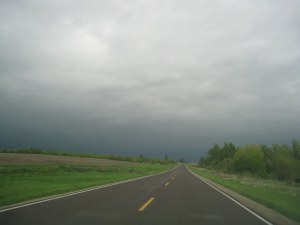 to be in the county north of St. Marys, so on Friday we decided to make a day trip up to see the historic and reportedly beautiful St. Mary’s church in the town of St. Benedict, near Seneca. I’m not sure why the church’s name is different from the town, but stranger place names exist in the state.
It was an overcast morning and there was talk of severe thunderstorms. But whether there is talk or not, that’s always a possibility in Kansas in the spring, and conversely, if it looks stormy, 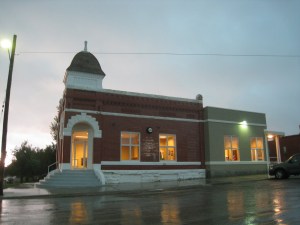 it could just as easily clear up. So we chanced it and started driving north on US-63. By the time we got to Corning, it started to rain. As we drove through the town, the sky had turned dark and it was as black as twilight. Less than a mile out of town, the real storm began and soon I was navigating on the narrow highway as the rain poured from the sky like washtubs. I knew I would make it as long as it didn’t hail. Despite the fact that my Dad was usually alarmed when anyone else was driving, especially in torrential rain, he was fairly calm through the worst of it.
It continued raining heavily, but less harsh, and the radio indicated the brunt of the storm was in 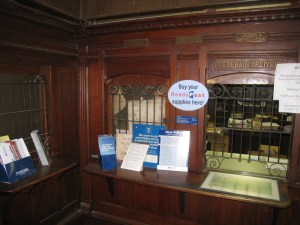 the vicinity. I convinced my parents that I was going to make a quick jaunt to Oneida, a small town between Seneca and Sabetha, not too far from the highway and out of the path of the storm. Somehow this tiny town of less than 100 souls has managed to keep its post office, but I wasn’t sure for how long. I nabbed a postmark and got some photos of the old fashioned interior before returning to the car in the rain and heading west to Seneca.
We drove through Seneca and continued the five miles to the tiny community of St. Benedict. By the time we turned the corner at the big church and parked, it 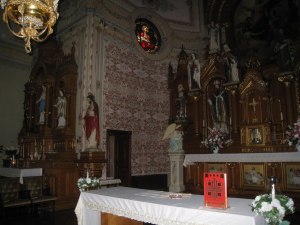 was only sprinkling and the sky had brightened to a light silver hue. Upon getting out of the car and opening up her umbrella, Mom got her finger caught in the metal handle as it opened up, thereby slicing a gash into her finger. She whimpered but decided that she wanted to see the church after driving all this way through the rain.
We walked up the steps and into the silent vestibule of St. Mary’s church. It was unlocked but no one was around. The church was indeed beautiful, with ornate stained glass, meticulously remodeled plaster work, an array of organ pipes towering over the choir loft and hand-painted vault ribs. The church was completely refurbished in the mid-1980s by Joe Oswalt and great care was taken to ensure the artistic 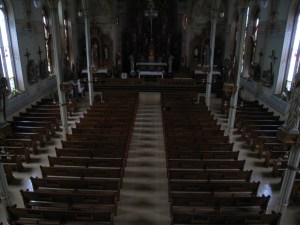 integrity of the original interior features. I’d say he did a pretty good job!

After walking around and taking in the intricate details of the church, we headed back to Seneca for lunch and to look for a bandage for Mom’s finger. We ended up at Lori’s Cafe, which was 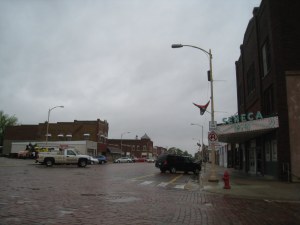 reputed to be the best place in town to eat. Of course it was one of the few, but the full parking lot was a good sign. They had a lunch special that included roast beef, vegetables and a slice of pie, so all three of us got that. The kind waitress even brought mom a Band-Aid.

We were stuffed, but managed to make it to a couple antique stores downtown before heading back. Since it wasn’t raining, I 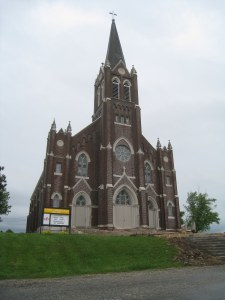 thought we might have a chance to stop at another notable church in Kelly. The steeple of St. Bede’s was clearly visible from the highway this time, but when we approached the road the church was on, the front steps had been removed and a big sign announced a renovation project and that masses would be held in Corning until the construction was finished. At least we were able to take a look at the exterior before continuing south on US-63.

As soon as we got home, Dad parked the car in the garage and I took my car to a mechanic because I’d heard my breaks squeak. I pulled into the garage and just as he started raising the car on the automatic lift, it started to hail. With unbelievable luck, my Mom and I stood in the garage and watched as hailstones the size of golf balls fell. We had to back up away from the entrance to keep from getting pummeled by them. The ground was littered with various shapes and sizes of white hailstones, some of which remained on the ground for up to six hours later! I sure was grateful for the chance to see the church and also for avoiding potential hail damage. I think I’ll call it a case of divine intervention.